By the time I was 16 I had already bought and sold a car, and more importantly, I did not lose any money.  Years later I did finally make money on another car, when my 1984 Mercury Cougar was stolen on Long Island.  Other than that, all losers.  I was given the car in this story, a white 1965 Falcon Futura automatic hardtop, but ended up losing in this one too.  Most of the time the money I lost went for purely for transportation but sometimes went for fun.

This pale Yellow Falcon Futura from the 1965 Ford sales brochure looks like my Falcon except for the colors.  Mine was all white including the top and the side trim was blue.  I wish I had a picture.  Had I read this page as a teenager I would not have been impressed by the 170 cubic inch 105 horsepower claims of “Up To 15% greater fuel economy.  I still would have chosen a V8.  At the time I thought my Falcon looked pretty good after the looks grew on me.  I still do, but that may be nostalgia talking.

Sadly this Falcon came to me as a newly minted driver after my grandfather passed away.  This car was supposed to be my car for the rest of high school and later for college.  As I remember this Falcon had very low mileage (around 30,000 miles or less) and was in pristine condition except for the scratches in the paint when my grandmother used a shovel to clear off the car.  The Pennsylvania Dutch were a practical sort, damn the torpedoes.

Of course after reading every Hot Rod, Car Craft, and Car and Driver I could get my hands on I was very disappointed.  I should have been grateful, but back than I was in immature blood sucker.  So after driving the car for a while I came up with a plan.  I would convince my parents that the 170 cubic inch 6 cylinder and automatic transmission would never last through 4 years of college.  What was needed was something more substantial like a V8 and a 4 speed.  And since I wanted to learn more about cars the process would be a learning process and be a valuable skill to learn. 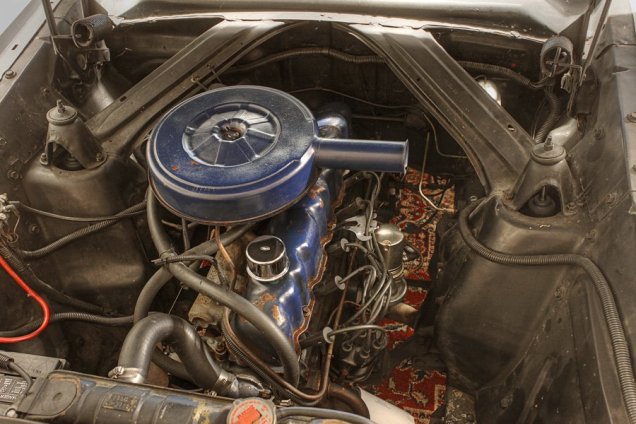 This is the sadness under the Falcon’s hood.  Although my Falcon must have looked cleaner and newer.  Notice what seems like quite a bit of extra room?

I also had around $500 that I received for a row boat I sold after we sold our house on the Mullica River.  I am not sure how I paid for that boat, but I do remember receiving the proceeds.  My parents were selling all of their northern properties to get ready for a move to Florida.   Our favorite vacation destination!  So when I presented my plan I made a point of my bank roll.  I don’t remember exactly when I presented that plan, but I do remember doing it while they were watching television to catch them off guard.

They knew me well.  I am sure I did not win approval on that first try.  At that time I am sure I got two eye rolls, but also at that time I was not perceptive enough to understand what eye rolls meant.  So I was undeterred and kept at it.  I think over time I wore them down as I get obsessed with my crazy ideas and never give up.  I was a bit “spoiled” and this idea was crazy.  While I am sort of mechanically inclined (or so I think), up to this point I had only lightly wrenched the two motorcycles I “owned” in my past.  What did I know about such a project?  Well I read a lot of magazines, projects run smoothly as I read, so it can’t be that hard.  I don’t remember when gave in, but they did. “Life is for learning” was where I was headed.

So now with my $500 and parental approval.  I started looking for a suitable engine.  I had enough sense to use a Ford engine, but which one?  Big block Fords came to mind but I was told early on that they would not fit under a Falcons hood without a lot of metalwork, meaning torches and welding.  So I set my sights smaller.  My friend from the Mullica River told he knew where there was a Ford 351 Cleveland 4 barrel out of a Mustang.  Waoh!  A new Ford update to the old Ford small-block with higher flowing heads and with a 4 barrel carb!  A dream come true. 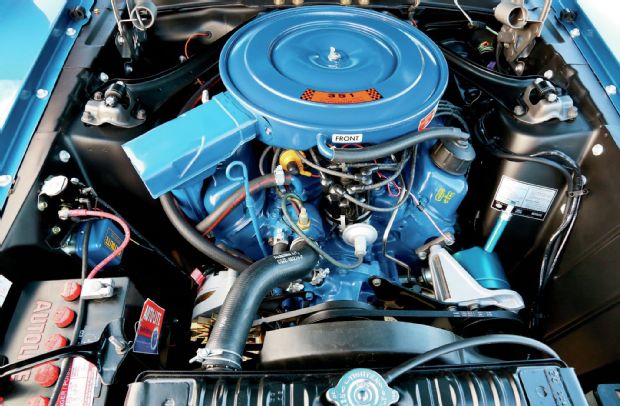 Here is a 351 Windsor in a Mustang.  See the small but available extra room?

So I made arrangements to go see it.  I was bummed as the engine was a 351 Windsor AND was a two barrel.  This was the lowest horse power 351 Ford made.  But I was almost new and here I was in front of me.  The project could begin.  Serendipity was kind to me here, as a 351 Cleveland-Falcon swap would have required torching.  Those higher flowing heads along with the higher deck height of the 351 over the 289 and 302 make for a much larger package.  But here I also found out the guy wanted $800 for the engine.  Wow, busted my bankroll just on the engine.

So I went back to my financiers for the first of many project cost overruns.  Next I started to think about where I might work on this project.  One of my friends from Palmyra offered up his big back yard with an oak tree!  So we went to his parents to ask permission.  And while I am sure there were more eye rolls, his Dad agreed.  I did not realize at the time this was a big ask as their yard, as I remember was quite nice.  I made a mess out of part of the yard, but I think after moving the car out of his yard I went back and planted some grass seed.  But maybe not.  If not now I wish I did.